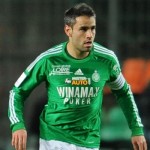 Reports are out claiming that Arsenal are unhappy with Saint-Etienne’s asking price for Loic Perrin.

The Daily Mail reported that Arsenal have gone cool on a deal for Saint Etienne’s Perrin after his club asked for £8million for the 29-year-old defender.

Perrin revealed earlier this week: “I was contacted personally. Arsenal are interested.