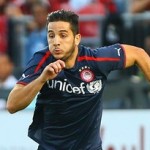 It has been reported that Arsenal are closing on a deal for Olympiakos defender Kostas Manolas.

The Mirror reported that Arsene Wenger is hopeful of completing a £6m deal for Greek defender Manolas.

Arsenal are having negotiations with Olympiacos for the 23-year-old centre half who has also been on Juventus’s hit-list.

Gunners boss Wenger has made Manolas his top target to bolster his injury-hit defence which has been left short of cover after Thomas Vermaelen’s departure to Barcelona.