Reports are out claiming that Arsenal have increased their pursuit of Neven Subotic according to reports. 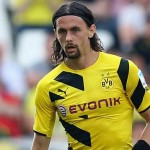 The London Evening Standard is among a number of outlets suggesting that the Gunners are determined to land the Borussia Dortmund centre-back in the summer.

?26-year old Serbian international Subotic has previously been a target for Arsenal but were unable to lure him to north London back in 2009, however, it appears as though he could become available following Dortmund’s horror season in the Bundesliga.

?Juergen Klopp has lost a lot of big-name players in recent times and Arsene Wenger is planning to make Subotic the latest as he looks to further strengthen his defensive stocks at the end of the current campaign.??? Welbeck To Inherit Bendtner’s No.23 Shirt At Arsenal