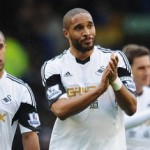 Reports are out claiming that Swansea City boss Garry Monk is desperate not to lose defender Ashley Williams.

WalesOnline reported that Arsenal, Sunderland and QPR are monitoring the Swans skipper’s situation, as his new contract talks rumble on.

But it is thought they have been told the 29-year-old will not be sold on the cheap, if at all, with the prospect of him seeing out the final year of his contract not ruled out by either side of the negotiating table.