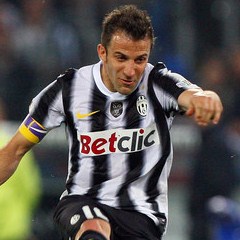 The former agent of Alessandro del Piero believes that the Juventus legend will move to England.

The 37 year old has been linked with QPR and Arsenal, but Argentinean club River Plate have confirmed their interest this week.

“I don’t think that he’ll go and play for River Plate in Argentina or in Canada,” said Claudio Pasqualin.

“Alex is just waiting for the right offer – probably from England.”