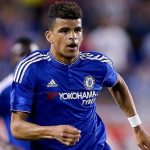 Reports are out claiming that Arsenal are ready to rattle Chelsea with a raid for superkid Dominic Solanke.

The Sun says the 18-year-old forward, currently on-loan with Vitesse Arnhem, is holding the Blues to ransom, demanding a staggering £50,000-a-week contract to stay at Stamford Bridge.

Solanke also wants assurances he will be given the opportunity to break into the first team and stamp his mark on the Premier League.

Now Arsenal have joined the race to land the England Under-21s star.

The Gunners are not prepared to meet the youngster’s high wage demands but will offer him a bigger role within the club.

Arsene Wenger has an excellent track record for bringing through youth stars.