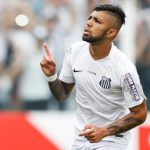 ESPN Brasil says Wenger has turned his attention to the man nicknamed ‘Gabigol’ for his striking exploits.

The Gunners desperately want to bring in a striker this summer, having missed out on No.1 target, Jamie Vardy.

Gabigol, 19, recently revealed he has offers and, while he would be very interesting in joining one of Europe’s top clubs, he is also reluctant to leave his hometown right away.

He said: “Yes, I have offers from some of the big clubs in Europe that interest me, but that is for my parents and my employers but I am happy at Santos.

“That will sort itself out in time.

“Santos is my home, but we will make a calm decision.”