It has been reported that Arsenal are chasing Bayern Munich striker Mario Mandzukic. 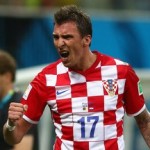 The Daily Star reported that Mandzukic, 28, is surplus to requirements at Bayern Munich and has been told he can leave the club.

Chelsea have been tracking the £15m-rated Croatia frontman and, according to reports on the continent, he would prefer a move to Arsenal.

Mandzukic scored twice against Cameroon and was watched by Arsene Wenger, who is working as a pundit at the World Cup.