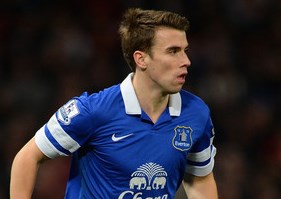 The People reported that Arsene Wenger will make an ambitious move for Everton’s Coleman if Bacary Sagna fails to sign a new deal.

The Arsenal boss wants his French World Cup defender, who becomes a free agent in the summer, to commit beyond the end of the season.

Coleman, 25, is now an Everton regular and recently signed a long-term contract, so his price could be as high as £10million.