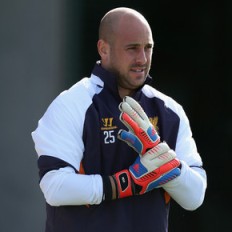 Reports are out claiming that Arsenal boss Arsene Wenger is ready to bid for Liverpool goalkeeper Pepe Reina.

The Mirror claims that the Frenchman will launch a determined bid to sign a goalkeeper in January – with Reina top of his wish-list.

The Arsenal boss also fancies Stoke City’s Asmir Begovic if he cannot agree a deal with Liverpool for Reina.

The fact Wenger is ready to go for a new first-choice keeper is seriously bad news for his current No1, Wojciech Szczesny.

Wenger tried to sign Reina two summers ago and Arsenal believe there’s a chance Liverpool will be willing to cash in and go for Birmingham City’s England prospect Jack Butland as a replacement.

Spain international Reina, who has had an indifferent season, is on £110,000-a-week wages, which is likely to be a major issue for Arsenal.

That is why they are also looking at Begovic, who has impressed Gunners scouts.