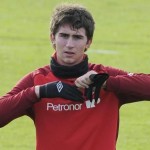 It has been reported that Arsenal boss Arsene Wenger is planning a January bid for Athletic Bilbao defender Aymeric Laporte.

The London Evening Standard says the 20-year-old Frenchman has established himself at the heart of the Bilbao defence and is rated one of the most promising players in La Liga. A full international call-up is thought to be imminent.

Arsenal manager Arsene Wenger is keen to strengthen in defence when the transfer window re-opens in January and Spanish sources believe Laporte is near the top of his list.

Arsenal sold Thomas Vermaelen to Barcelona before the start of this season and some Gunners fans believe they have yet to replace him adequately.