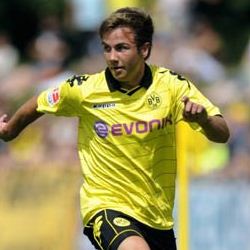 German reports suggesting the Gunners had a £35million bid rejected by Dortmund were dismissed by the north London club.

However the Daily Mail revealed that Arsenal did make an initial enquiry over the availability of Gotze in the closing days of the summer transfer window.

Dortmund chiefs insist Gotze will remain in the Bundesliga for the remainder of this season and the whole of next while also claiming that when he does leave it will be for a ‘bigger’ club than Arsenal.

But that will not stop Gunners manager Arsene Wenger in his chase for one of Europe’s most coveted young talents.