Reports are out claiming that AC Milan are preparing to sell Mario Balotelli this summer. 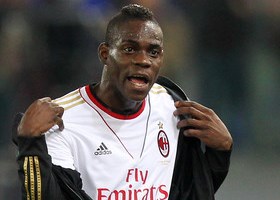 The Sunday Express reported that Milan have run out of patience with the antics of Balotelli and are ready to sell him to Arsenal or Tottenham in the summer.

The Italian international striker clashed with journalists after being substituted during Milan’s 2-0 loss to Roma on Friday night.

And reports in Italy suggest that the outburst is the final straw for the Milan hierarchy.

Arsenal are favourites for Balotelli after their new kit deal with PUMA, which also have Balotelli as part of their stable.

Spurs are also interested in the former Manchester City forward.

Lukaku hopes to get chances at Chelsea next season

Gervinho : I’d Be Lost Without Football!