Reports are out claiming that versatile Borussia Dortmund ace Kevin Grosskreutz is set to be the subject of a bid from Arsenal. 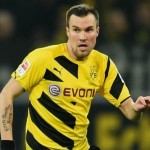 The 26-year old, who can operate at both sides of full-back, as a winger or in midfield, has emerged on the winter transfer radar of Gunners boss Arsene Wenger according to The Express.

Grosskreutz is also a target for Manchester United but it is believed that he prefers a move to Arsenal who could land him for less than £4million.

The five-time Germany international joined Dortmund from Rot Weiss Ahlen back in 2009 and has gone on to make more than 230 appearances for Die Schwarzgelben.