It has been reported that Arsenal boss Arsene Wenger is reviving his long-term interest in Barcelona striker Luis Suarez. 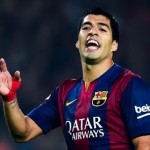 The Sun says Wenger will have big money to spend next summer and has put the misfiring Barcelona forward at the top of his wish list.

Suarez completed a dream £75m move from Liverpool to Barca last summer, but has since struggled to find his best form.

The Uruguay superstar, 27, has scored just twice for the Catalan giants since returning to action in October following his four-month bite ban.