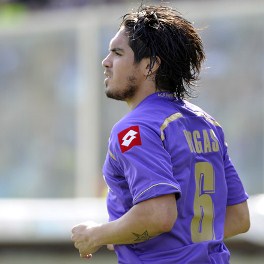 The Mirror has reported that Arsene Wenger is ready to go back for Fiorentina’s Vargas in January.

The Arsenal boss was interested in versatile Vargas in the summer, but decided he wanted to continue to scout him this season.

The 27-year-old Peruvian can play left back, left midfield or central midfield. He also has a reputation as a tough nut, which could help the Gunners strengthen their line-up.