Reports are out claiming that Arsene Wenger has switched his attention to Paris Saint-Germain striker Edinson Cavani, following the news that Karim Benzema will not switch to London this summer. 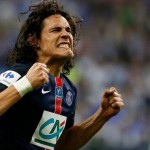 Benzema Tweeted on Monday that, contrary to persistent rumours, he will not be leaving Real Madrid this summer.

Cavani’s name has been thrown into the ring as a possible transfer option for Wenger, who is keen to add another big name to his squad following the acquisition of Petr Cech from Chelsea in July.

The 28-year-old Uruguayan has been prolific in his time with the French giants, and would most likely cost Arsenal somewhere in between the £30million they paid for Alexis Sanchez and the £42m they outlaid on Mesut Ozil.