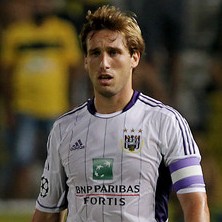 Reports have emerged claiming that Real Madrid and Arsenal are among clubs watching Lucas Biglia’s situation at Anderlecht.

The 26 year old admits he is keen to test himself at a higher level and secure his place in the Argentina side ahead of the World Cup in Brazil in 2014.

“Time is running out,” he told Het Nieuwsblad.

“I don’t have to be at a big top team, just to a bigger league. I need that if I want to play with Argentina in 2014 at the World Cup.

“If I arrive in Argentina my manager will pick me up at the airport. I have asked him to tell me in Buenos Aires what my options are. I hope to begin after New Year’s Eve. In England, Spain and Italy there is not a real winter break.

“It’s clear Spain and Italy are dream destinations but I won’t close the gate on Russia.” Arsene Wenger Delighted With The Form Of Aaron Ramsey