Reports are out claiming that Olympique Lyon defender Samuel Umtiti is wanted by England’s biggest clubs. 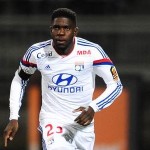 It is said that Manchester City, Arsenal, Real Madrid and Inter Milan, are all tracking the French Under-21s international.

Cameroon-born Umtiti, 21, is valued at £11m and can play centre-back or left-back.

Liverpool have also expressed interest. Liverpool boss Brendan Rodgers has issues in defence, with former Lyon centre-back Dejan Lovren, 25, having struggled in his first season at Anfield after a £20m move from Southampton.