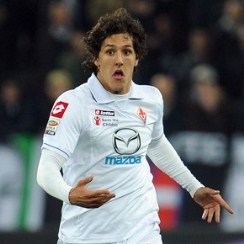 Reports are out clamining that Arsenal boss Arsene Wenger has not given up his interest in Fiorentina striker Stevan Jovetic.

A top Gunners spy watched the Montenegro international in the recent Serie A clash against Catania. Jovetic impressed, scoring twice both of Fiorentina’s goals in a 2-2 draw. And the Gunners are planning to watch the forward again over the coming weeks as they step up their interest in the highly-rated forward.

Jovetic will not come cheap, though, after signing a new long-term deal with the Italian club recently, though sources close to the player say he is open to a move to England.


Royston Drenthe Happy To Have Settled Down In Everton