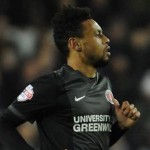 It has been reported that Arsenal have recalled Francis Coquelin from his loan with Charlton Athletic.

Arsene Wenger has a defensive crisis on his hands with Per Mertesacker the only fit centre-back.

Laurent Koscielny and Nacho Monreal are injured while Calum Chambers is suspended.

Coquelin, 23, is a defensive midfielder but he can also play at the back.

An Arsenal statement read: “Francis Coquelin has returned to Arsenal from his loan spell with Charlton Athletic.

“The 23-year-old featured five times for the Championship club during his six weeks at the Valley.

“Coquelin will be available for selection for Saturday’s Premier League match against Newcastle United.”