Reports are out claiming that AC Milan have already opened talks with Arsenal for Joel Campbell. 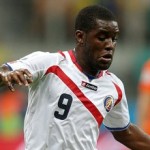 Studio Sport reported that the Italian giants have made a loan offer with a purchase option for the Costa Rica international – which was immediately rejected by Arsenal.

Milan haven’t completely dropped their interest and will try again if they cannot do business with Torino for Alessio Cerci.

Campbell is due to join up with Arsenal’s squad later this week for the start of his preseason training.

Since signing for the Gunners in 2011, Campbell has spent time away on-loan with Lorient, Real Betis and Olympiacos.