Reports are out claiming that Arsenal remain in the hunt for Real Madrid goalkeeper Iker Casillas. 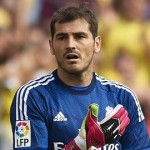 The Daily Star reported that the Spanish international was heavily linked with a move away from Spain in the summer, and several reports suggested Premier League giants Arsenal and Liverpool were eager to snap up the 33-year-old.

But neither team made a move for him, and he ended up staying at the Bernabeu.

However, it’s believed Gunners boss Arsene Wenger will make a bid for the Spain captain in the January transfer window.

Sources in Spain claim the Frenchman is eager to strengthen his team’s goalkeeping options following the recent injury to new signing David Ospina.