It has been reported that Arsenal remain in the hunt for Barcelona striker Munir El Haddadi. 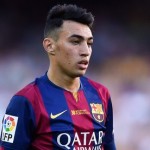 The teenage striker burst onto the football scene earlier this season, getting on the scoresheet for Barca and breaking into the senior Spain squad.

Arsenal boss Arsene Wenger is a big fan of El Haddadi and has been encouraged as new contract talks continue to stall.

With Luis Suarez now fit and available, El Haddadi faces being demoted to Barca B and an uncertain future beyond the end of this season.

Wenger knows he can prise El Haddadi away in January by meeting the €12 million buyout clause in his current deal.