Reports are out claiming that Arsenal boss Arsene Wenger plans to test Bayer Leverkusen’s resolve with a bid for Lars Bender. 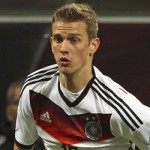 The Daily Star Sunday reported that Wenger has German international in his sights as he seeks a holding midfield player now that moves for Real Madrid’s Sami Khedira have gone cold.

The 25 year old is one of the toughest tacklers in German football and would cost around £15m.

Bender would join Arsenal’s fast-growing list of German players at the club, including World Cup winners Ozil, Per Mertesacker, and Lukas Podolski.


Tottenham, Liverpool To Do Battle For PSV Winger Memphis Depay