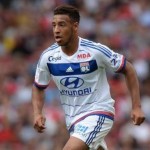 The 21 year-old is being scouted by Arsenal this season, says L’Equipe.

“All the major championships are attractive,” says Umtiti.

“But the Premier League, with clubs that are there, it makes you want to play there.”