It has been reported that Arsenal are interested in Molde goalkeeper Orjan Nyland. 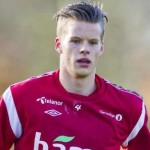 Nyland has in the past attracted interest from Manchester United.

Molde chief Tarje Nordstrand Jacobsen confirmed to Rbnett: “There have been scouts from several major leagues at Aker Stadium, including the Bundesliga and the Premier League.

“Arsenal are among them, but I cannot say which players they’ve looked at.

“It’s only Arsenal who can answer that.”

Agent Jim Solbakken added: “Orjan has been good for a long time and there is plenty of interest in him. But I cannot comment on which clubs may arise.”

We All Dream Of Having Players Like Luis Suarez – Wenger