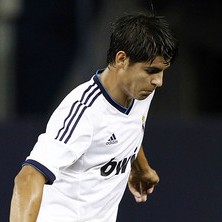 It has been reported that Arsene Wenger has not dropped his interest in Real Madrid striker Alvaro Morata.

The Mirror reported that the Arsenal boss tried to sign the youngster on loan from the Spanish giants’ B team earlier this year, and has been alerted again because he is not getting action at the star-studded Bernabeu.

Morata, now 20, scored for the Real first team last weekend at Levante, but Wenger is still hoping he might stand a chance of pulling off a January deal for a player they have courted for two years.

Jose Antonio Reyes : I Always Hope For The Best For Arsenal!