Interesting transfer news are out claiming that Arsenal are hopeful of signing Paraguayan whizkid Antonio Sanabria away from Barcelona. 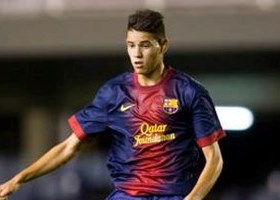 The Mirror reported that Arsene Wenger has been on Sanabria’s trail for months but also faces a fight with AC Milan.

The Spanish champions want to keep Sanabria, 17, who could be the latest star to join the Gunners from the Nou Camp.

Marouane Chamakh Ready To Prove Himself Against Arsenal