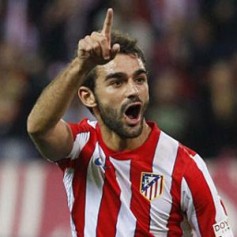 It is said that the French tactician is eager to sign a new centre-forward in January after accepting he has not managed to fill the void left by former skipper Robin van Persie.

It is said that Wenger is prepared to launch a £15 million bid for the 24 year old Spanish international star.

The Gunners boss knows he must strengthen his attacking options after privately admitting Olivier Giroud and Gervinho are not the answer to his central-striking quandary.