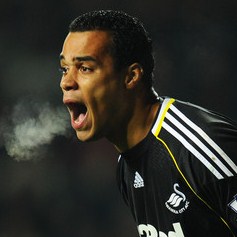 Reports are out claiming that Swansea City goalkeeper Michel Vorm is a January target for Arsenal boss Arsene Wenger.

The Daily Mail reported that Wenger has been given the green light to spend big in the January transfer window and it is said that the Frenchman has identified three key areas: a keeper, a wide attacking player and a central striker.

Vorm remains a strong contender in the club’s search for a keeper. Arsenal have watched the Dutchman extensively while they will also keep a close eye on Pepe Reina’s situation at Liverpool. Wenger is a huge fan of the Spain squad man and attempted to sign him in 2010.

Wenger wants his new keeper to compete with — and potentially replace — Wojciech Szczesny, not to be second choice.

Arsenal’s goalkeeping problems were clearly illustrated on Saturday, with stand-in Vito Mannone partly at fault for Fulham’s first two goals in the 3-3 draw.