Reports are out claiming that Arsenal are chasing Southampton fullback Calum Chambers. 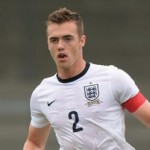 The Daily Mail reported that Southampton have an interest in Arsenal midfielder Serge Gnabry, fueling talk of a swap deal.

Manager Arsene Wenger has admired the 19-year-old for some time and has had favourable scouting reports throughout the season.

Although he has bought Mathieu Debuchy from Newcastle, he is allowing Carl Jenkinson to leave and that will vacate room for Chambers.