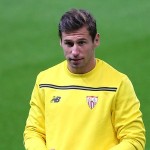 Fichajes.com claims that he 25-year-old has been in blistering form in Spain and is believed to have a £21m release clause in his contract.

Wenger is a big admirer of Krychowiak and tried to bring him to the Gunners in the summer.

The Polish defensive midfielder would be the perfect partner for Francis Coquelin who has been integral to Arsenal’s recent good form.

The Poland international has recently rejected a new contract offer from the Spanish club putting Arsenal and Manchester City on alert and ready to make their move in January.