Serse Cosmi has admitted that he is not surprised to hear Arsenal are interested in Fiorentina wing-back Juan Cuadrado. 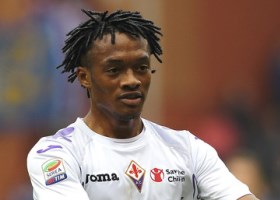 “The qualities of Juan were clear also in Lecce. His technique and quality was significantly higher than all of his teammates,” Cosmi told TMW.

“He had to play only a couple of seasons at high levels to increase our awareness of his ability.

“For me it is absolutely not a surprise (big clubs are watching him).”