Transfer news are out claiming that Arsenal are again being linked with QPR goalkeeper Julio Cesar. 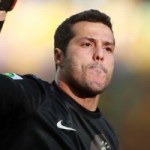 The Daily Star reported that the Brazilian international is set to leave Loftus Road after only one season with the club and Arsenal manager Arsene Wenger has been weighing up an offer for the former Inter Milan goalkeeper.

Josias Cardoso, Cesar’s agent, admitted initial contact has been made with Fiorentina even though he is not directly speaking to the club.

“The player is willing to wait to find another team.

“Fiorentina must also offer a four-year contract or one spanning at least until 2017.”

The Arsenal manager is looking to bolster his goalkeeping options and offer some tough competition to current number one Wojciech Szczesny.

Arsenal Linked With A Move For Juventus Star Claudio Marchisio