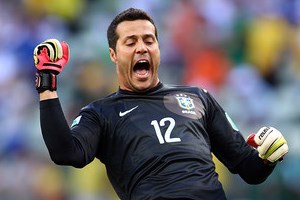 Reports are out claiming that Arsenal boss Arsene Wenger is reviving a bid for QPR goalkeeper Julio Cesar.

The Daily Star claims that the Frenchman remains interested in the Brazilian as he seeks a new, experienced keeper signing.

Valencia have confirmed they’ve rejected a bid from Arsenal for Vicente Guaita and Wenger is now returning to the negotiating table for Julio Cesar.