Reports are out claiming that Arsenal are reviving their bid for Bayer Leverkusen midfielder Lars Bender. 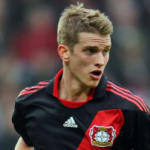 The Sunday Mirror revealed that the defensive midfielder is back on the Gunners’ wanted list despite the fact they had a £19million bid turned down for him just two months ago.

The 24 year old Germany international is under contract until 2017 and his club have qualified for the Champions League.

However it is said that Arsenal hope they can do a deal before the end of the month.