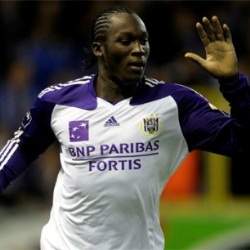 It has been revealed that Arsenal have made a £14 million bid for Anderlecht striker Romelu Lukaku.

The Sun has reported that Arsene Wenger now believes he can beat rivals Chelsea to the 18-year-old striker’s signature.

He was then expected to fly to Portugal where the Belgian club are based during pre-season, to talk to the teenager.

Chelsea were hot favourites to land the 6ft 3in starlet, who is rated one of the top young players in Europe.