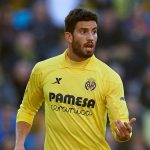 Reports are out claiming that Arsenal are showing significant interest in Villarreal’s Mateo Musacchio.

According to Spanish publication Fichajes.net, the Gunners have joined the race for the Argentine defender who is also on the radar of AS Roma.

25-year-old centre-back Musacchio has been a key figure at El Madrigal for the past few seasons but could be lured away from Spain if the right club were to come forward with an offer.

Arsene Wenger remains in the hunt for a new central defender and is already plotting a summer swoop for Napoli’s Kalidou Koulibaly but Musacchio has now emerged as a genuine target.