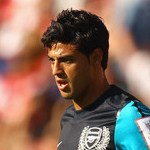 It has been revealed that Arsenal striker Carlos Vela is set to join Spanish club Real Sociedad on a season-long loan.

The 22-year old Mexico international star was sent to West Bromwich Albion last season and now Arsene Wenger has sent him off again to continue his development.

Vela’s move will be sealed once he passes a medical and he will join Brazilian winger Pedro Botelho as players to go on loan with the 21-year old set for Rayo Vallecano.

“Everyone at Arsenal Football Club wish Carlos and Pedro the best of luck with their respective clubs for the season ahead,” read a statement on the Gunners’ official website.