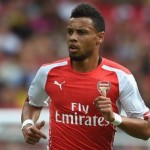 It has been reported that Championship Charlton have signed Arsenal midfielder Francis Coquelin on loan until 1 December.

The 23-year-old full-back, who has made 44 senior appearances for the Premier League side, had a loan spell with German club SC Freiburg last season.

The France U21 international is eligible to make his debut for the Addicks in Tuesday’s match at Leeds United.