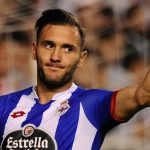 Reports are out claiming that Arsenal are set to imminently complete the signing of Deportivo La Coruña’s Lucas Perez.

The Spanish striker landed at London’s Heathrow airport on Monday evening ahead of a £17million move to the Emirates Stadium.

Gunners boss Arsene Wenger recently confirmed that Perez, 27, would be joining German defender Shkodran Mustafi in North London and images of the attacker arriving in the English capital have now emerged indicating the transfer is inevitable.

The left-footed forward has netted a total of 24 goals in 59 appearances for Deportivo while also previously featuring for Greek club PAOK, Ukrainian outfit Karpaty Lviv, and before that in his native Spain with Rayo Vallecano and Atletico Madrid. I Can Still Improve! – Mesut Ozil