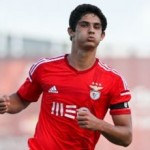 Reports are out claiming that Arsenal are rated favourites for Benfica whiz Goncalo Guedes.

The 17-year-old forward is yet to make a first-team appearance for the Europa League finalists, but is already reportedly being tracked by a number of Europe’s top sides, including AC Milan, Bayern Munich and Borussia Dortmund.

However it is Arsenal who are reportedly in pole position for his signature, says O Jogo.