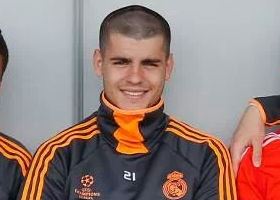 The Sunday Express reported that Arsene Wenger wants the 21-year-old hitman to lead the line next season as he looks to challenge for the Premier League title, but could see his efforts thwarted by Carlo Ancelotti and the Madrid board.

Ancelotti confirmed he is looking to tie up a deal for the youngster, saying: “Morata has been doing a great job this season. I hope he will stay at Madrid. We need him. He has the potential to be close to Benzema and Cristiano Ronaldo.”