It has been reported that Mesut Ozil has urged Arsene Wenger to pursue Mario Gotze this summer. 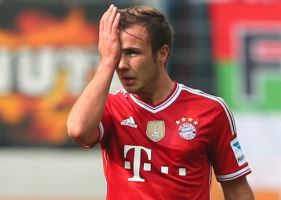 Football Direct News revealed that the Arsenal playmaker has instructed the Gunners boss to go after the 21-year old Bayern Munich midfielder despite the fact he only joined the Bavarian giants a year ago.

An Arsenal source reportedly told FDN that Ozil has implored Wenger to see if Pep Guardiola would make ex-Borussia Dortmund ace Gotze available after he did not make him a regular in his first campaign at the Allianz Arena.

“My understanding is that Ozil has personally recommended that the club go after Gotze if he is available,” the Arsenal source revealed.

“We have looked at him before and something could happen again if he is available. Having players like Mesut at the club could certainly be an advantage in luring bigger names.”