Reports are out claiming that Arsenal are weighing up meeting the buyout clause of Sevilla powerhouse Grzegorz Krychowiak. 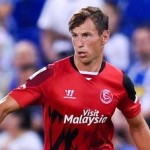 The 24 year-old Poland international has been a revelation for La Liga title prospects Sevilla since his summer arrival from Reims.

Krychowiak has been watched by senior Gunners scouts and is now being considered by manager Arsene Wenger for the January market.

The Sun says Krychowiak’s deal has a buy-out clause of £24m.

Sevilla will be reluctant to do business, with the club flying high among the Liga leaders this season.