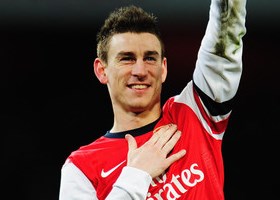 The France international centre back has begun discussions with Gunners chiefs about signing an improved deal even though his current agreement runs for three more years.

Arsenal are prepared to lift Koscielny’s salary to £90,000-a-week, bringing it in line with the second tier of earners at the club, who include Jack Wilshere, Aaron Ramsey and Theo Walcott.

Reports in France have claimed that Manchester United, Chelsea, Bayern Munich and Paris Saint-Germain are all keeping close tabs on the Frenchman.