Arsene Wenger will make his first dip into his transfer kitty with an £8million bid for France starlet Gilbert Imbula. 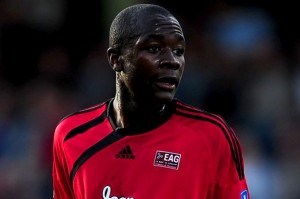 Arsenal boss Wenger has £80m to spend in the summer and wants to make Gilbert Imbula, 20, his first signing.

The 20-year-old has also been watched by Chelsea and Lyon, with Guingamp likely to want around £8million to part with him this summer.

Imbula was born in Belgium to Congolese parents but moved to France at a young age and has a French passport.

He is a powerful defensive midfielder – a position the Gunners want to strengthen – and helped Guingamp gain promotion to the French first division last season.

Wenger has money available to spend on big-name ‘finished articles’ this summer but is also keen to boost the squad with good young prospects.

Arsenal have also been tracking Freiburg’s Germany U21 international Matthias Ginter, but face competition from Borussia Dortmund for the versatile 19-year-old defender or midfielder. Bacary Sagna Ready To Commit His Future With Arsenal