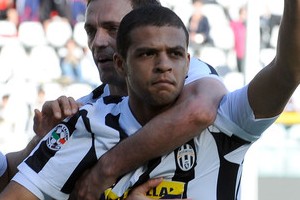 Interesting news are out and it has been reported that Premier League side Arsenal are closing in on a deal for Juventus midfielder Felipe Melo.

It has been reported that Gunners boss Arsene Wenger is a long-term admirer of the Brazilian.

Melo, 26, cost Juventus £25million but they are willing to offload him for a fraction of that price as he has not adapted to life in Serie A.

Arsenal tried to sign him last year but they were outbid by the Turin giants.