It has been reported that Arsenal boss Arsene Wenger is using his close ties with PSG to open talks for Ezequiel Lavezzi. 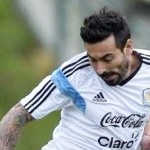 The Sun claims that Wenger has made the Argentine a priority summer transfer target and is willing to offer £15 million for his signing.

However, Wenger is now moving for the former Napoli star, who he sees as the type of ‘fox in the box’ capable of playing alongside centre-forward Olivier Giroud.